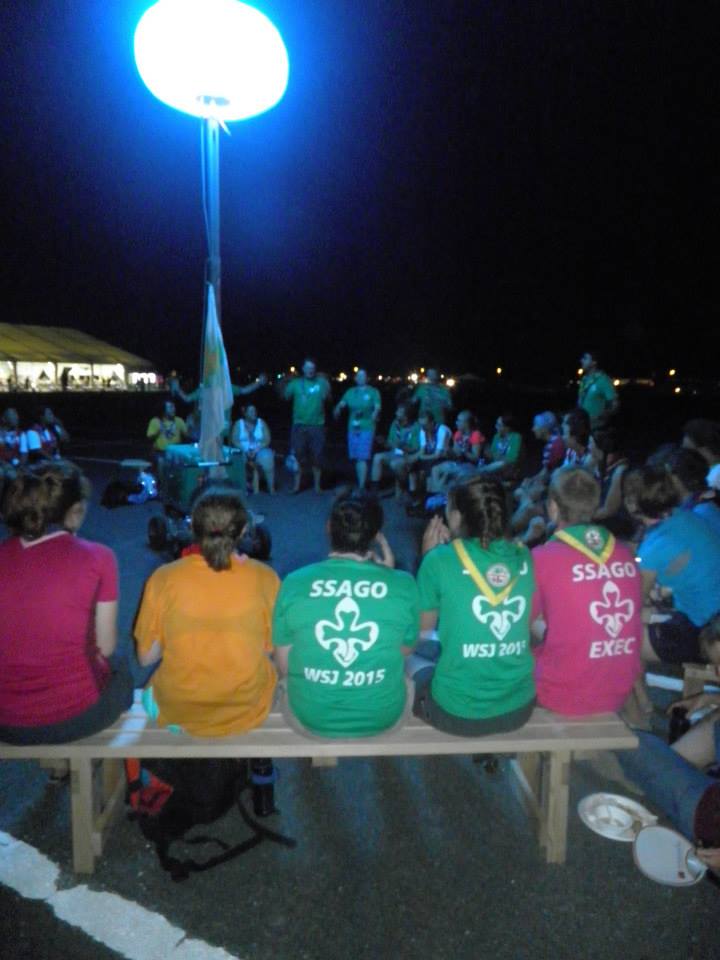 We don't need fire for a campfire

With so many SSAGO members in Japan some kind of meet up was definitely called for. A campfire was therefore planned one night, and not even the complete absence of any fire was enough to deter SSAGO!We set ourselves up around a handy spotlight, and hoisted the SSAGO flag. The singing was a mix of traditional SSAGO songs, along with some new ones from our international friends. Scouts that attended found it funny and welcoming, and thought that the impromptu nature of it matched the Jamboree setting.

One of the best surprises of the Jamboree, was meeting student scouts from other countries. There were even whole SSAGO esque organisations that we had never made contact with, such as the Polish Akademicka who invited some of us to an informal meeting one night, and by informal I mean it took place in a ball pit! We talked about how our different organisations worked, some of the challenges we face, and possible opportunities for us to meet up at future international events. The whole experience made it feel as though SSAGO was more connected to the rest of the scouting world than before!

SSAGO to the Rescue

One of the unexpected challenges of camping in Japan, was the warning of an tropical storm that was expected to hit the campsite, luckily on a night before the participants arrived. Even though the storm never hit the site, the warning was enough to make some of the IST contingents want to sleep indoors.

As a result of being friendly, helpful, and in the right place at the right time, some SSAGO members found themselves coordinating directing these people into the building and sorting out where they were sleeping. Despite it not being our assigned job, SSAGO was up to the task, gaining us international brownie points and upholding the reputation of SSAGO!

One of the experiences offered as part of the post-Jamboree travel options was the chance to climb the highest mountain in Japan, Mt. Fuji. Three intrepid SSAGO members took on this challenge!

It wasn't easy, rocky paths, cold, darkness, moth attacks, expensive beer, and lack of oxygen were just some of difficulties faced and overcome. However after trudging up through the early hours of the morning, it all seemed worth it when we saw the view.